There are a lot of similarities between the boom and bust of the Beanie Baby market in the 1990s and booms and busts in financial markets.  They are often based on the so-called "greater fool theory" which is essentially "I know that I am a fool for buying this at this price, but I am counting on a greater fool to buy it from me in the future".

Anyhow, here's a fun article about the Beanie Baby market: https://www.theguardian.com/lifeandstyle/shortcuts/2019/jun/19/what-beanie-babies-taught-a-generation-about-the-horrors-of-boom-and-bust
Posted by Rich at 2:41 PM No comments:

Some hedge funds are using satellite data to count cars in parking lots of retailers.

It's interesting how little biases creep into how people make investing choices.  For example, the alphabetical order of the 401K choices listed in a plan brochure (or website) can influence the choices that investors make.

This is discussed in a recent paper published in the Financial Review (an academic journal that I c0-edit).

There are several solutions to this problem.

A nice discussion of cash - money in short term accounts

If you create a bond with a 2% coupon in a world where interest rates are 0.9%, you can bet that that bond is going to be very very volatile.

Case in point - Austria's 100 year bond that matures in 2117.  (note: register for the economist and you can view a few articles for free).

My quick calculations show that this bond has a duration of about 56.  That's pretty high!  I'd be interested to know whether investors are buying this a straight bet on interest rates or whether they are using it as part of a portfolio.  You wouldn't need much of this bond to tilt the duration of your portfolio higher.

Here are my excel computations, with the predicted price change using duration alone (which is not terribly accurate in this case).  For bonus points - explain why this is the case...

Why stocks are good hedges for inflation.

I was quoted yesterday in the Wall Street Journal on why stocks are good hedges for inflation.
Article is here: https://www.wsj.com/articles/which-is-the-better-inflation-hedge-stocks-or-gold-11560132361?mod=searchresults&page=1&pos=8

Quoting from the article:

The reason stocks are a decent inflation hedge is because corporate earnings grow faster when inflation is higher, and grow more slowly when inflation is lower, according to Richard Warr, a finance professor at North Carolina State University. Consider the growth rate of corporate earnings over all 10-year periods since 1871, according to data compiled by Yale University finance professor (and Nobel laureate) Robert Shiller. The volatility of those growth rates was 21% less on an inflation-adjusted basis than it was on a nominal basis, which Prof. Warr says is a good indication of the extent to which equities are able to hedge inflation.
To be sure, Prof. Warr adds, higher inflation does reduce the present value of the otherwise higher future earnings. But these two effects should more or less cancel each other out over time.
Prof. Warr acknowledges that, over shorter periods of a year or two, stocks often suffer when inflation heats up. His research suggests that is because many investors are guilty of what economists refer to as “inflation illusion.” That is, they focus only on the reduction in the present value of future earnings to which inflation leads, while ignoring the tendency for nominal earnings to grow faster when inflation is higher. So when inflation spikes upward, they sell stocks.
Since the inflation illusion is irrational, it is difficult to predict whether investors will be guilty of it the next time inflation heats up. But Prof. Warr says that if they do and their selling causes the stock market to drop, investors should treat it as a buying opportunity."

Bogle and the genius of indexing.

Jack Bogle passed away this week and the investing world lost one of the most important figures in modern history.   Bogle's contribution to investing is simple but of profound importance.  He showed that an index fund, run entirely passively, could outperform most actively managed funds in the long run.

I've long been a very strong proponent of indexing.  I've posted heavily on the topic here in this blog, but a quick recap of why indexing is so brilliant is probably in order.

In reality however, more than 50% of active managers trail the market because of trading costs and fees.  These costs can easily be 1-3% or more per year, enough to cause a significant drag on performance.  Bogle realized that if you just bought "the market" and didn't trade and didn't spend money on active management, you could reduce the total costs to a nearly trivial amount, less that 1/10 of a percent.   The simple outcome of this strategy is that the "indexed" fund will beat more than 50% of all active funds in a given year, and in the long run will beat most active funds.

You might be thinking, surely 1 or 2 percent isn't that much?   Well, consider an investor with a million dollars: 1% is $10,000 per year every year.  This is a significant performance drag.

This is why, in the long run, indexing always wins.  It's why I personally am 97% indexed and why I strongly advocate it for all investors (including pension funds).

And this is Bogle's legacy.  He's enabled many ordinary investors to be much wealthier than they would have bee had they stuck with active managers.


"... he bet his entire career and his mutual-fund firm on the notion that the vast majority of active fund managers would be unable to beat a simple index fund. And there was hardly a single calendar year since 1976, when he created the Vanguard 500 Index Fund in which he was wrong."

An interesting deal.  IBM has a strong presence in this area, and of course Redhat is a Raleigh based company.   Details of the deal are here: https://www.marketplace.org/2018/10/29/business/ibm-bets-34-billion-cloud-computing-red-hat-purchase.

A back of the envelope analysis suggests that there's about $7bn in merger gains. 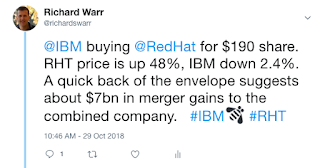 Dividend cuts are quite rare and even rarer for a stallwart stock like GE.  But yesterday, GE cut it's dividend to a penny a share.

There wasn't much of a price reaction, the stock had been on a downward trend, but the dividend cut certainly didn't help. 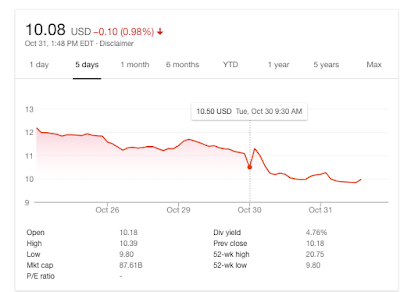 A dividend cut signaled that GE is struggling, but I don't think that was news to anyone.  Even an analyst upgrade didn't help the stock price.
https://www.barrons.com/articles/ge-has-problems-but-analyst-sees-upside-for-the-stock-1540998708

A lower dividend payout means that the company can retain more cash and invest in growth, but as basic finance theory would state, dividend policy should be largely irrelevant in firm value.

That's the question that we (myself, Roger Mayer of NC State and Jing Zhao at Portland State) recently studied in a paper that's forthcoming in the finance journal: Financial Management.

The answer is YES.   We found that firms that promote diversity have more new products, more patents and more influential patents.

And here's a nice write up on WUNC radio's website, together with some additional links that talk about the benefit of diversity in teams.  http://wunc.org/post/study-diverse-companies-are-more-innovative
Posted by Rich at 9:27 AM No comments: