The movie is OK, if you don't know much about finance.   However, if you do happen to know a little bit about how markets actually work, you'll be cringing all the way through.

The basic plot:  Clooney is a TV star (a la Cramer) who runs a stock picking show.  Roberts is his producer.  At some point Clooney had recommended a stock (in an evil corporation called IBIS) and said it was as safe as a savings account (sound familiar?).  Some guy looses his savings in this stock and comes to the studio and takes Clooney hostage.   Drama ensues until there is a showdown with the evil corp CEO who admits defrauding the stockholders.   The hapless investor gets shot by the the police, and Clooney suffers a bad bout of Stockholm Syndrome.

Here's what drove me crazy.

Apparently the evil CEO had manipulated his stock price (no explanation of how) so that it crashed and lost $800 million of investors money.   He then took this money and bribed a South African union to strike at a mine in South Africa.  With the strike underway, he ploughed his $800 million into this mining stock.  His brilliant plan was to call off the strike and cash in when the stock went up in price.

What is so stupid about this, is how on earth the CEO was able to extract the $800 million due to the decline of IBIS corp's stock?  All I can think of was that he must have shorted the stock and then announced some very bad news.  But such an action would have been such a blatant case of insider trading that the Feds would have been all over it.  And anyway, there was no mention of the CEO saying anything.  In the movie the price crash is a mystery to the media and to folks at IBIS.

In reality, the writers of the movie clearly don't understand what happens when a stock price falls.  They seem to think that the reduction in value must have wound up in someone's pocket.  And of course, who else but an evil CEO.  To make a movie about finance and not understand the basic premise of the stock market really boggles the mind.

What's even more confusing was that IBIS corp apparently hires its own "quants" to run HFT trading strategies on its own stock.   Why?   Are they buying on IBIS corp's account?   Is this some sort of repurchase program?   I just don't get it.   But the kicker is that the HFT guys hardly trade at all on the day of the IBIS corp stock crash.   To quote the movie: "it has someones fingers all over it".

One more stupid thing:
They send a producer to the SEC to find out what is going on.   He comes back with a piece of paper that says that the volume was down 80% on the crash day.   Umm, you don't need to go to the SEC to find that stuff out.   Try yahoo finance instead.

So unless you really like Clooney and Roberts, give this one a miss.   Watch "the big short" instead.

Email ThisBlogThis!Share to TwitterShare to FacebookShare to Pinterest
Labels: movies

On a recent episode of NC SPIN, the topic was pension fund fees.   I was quoted at the start of the segment.  The video is here:  The bit about the pension fund starts at 17:37.

While the discussion was pretty good and I am glad to see that the fees are getting more and more attention, there were a few comments that I think need addressing.

1. John Hood talks about the idea that if everyone indexed, markets wouldn't be efficiently priced anymore.   While in theory, this is correct as no one would trade on actual information, in reality it would never happen, simply because, as prices got out of whack, investors would have the incentive to pile back in to active investing.  But Hood does emphasize that we need to reduce costs.

2. I think that this focus on getting higher returns is a fool's errand.   This notion that there are good returns out there and that all we need to do is find them is pretty silly.   This might seem counter-intuitive, but in reality an $85 Billion pension fund is going to be broadly invested across stock and bond markets.  Because of this, the fund is really just a price taker - it will earn whatever these broad market segments earn.  The two key decisions that the fund has to make are 1) what is the mix of stocks and bonds and 2) how do we get this mix and at the same time pay as little in fees as possible. 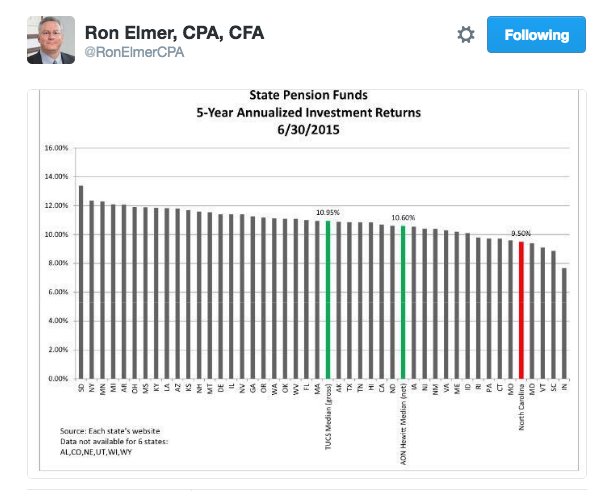 4.  Mr Michaels also talks about investing in infrastructure projects as a way to boost returns.   I think that this would be a terrible idea - risky and expensive.   Stick to stocks and bonds.

5.  There was some discussion of broadening the control of the fund to a board structure.   I support this idea, providing that we have good people on the board!

6. The idea of defined contribution plans was also raised.  While a DC plan gets the state out from its pension obligations, it is not a solution to high fees.   So I think that this is red herring.

Bottom line, I appreciate that the panel of NC SPIN took the time to discuss this issue and keep it in the attention of the electorate.  I hope both candidates for Treasurer put fees at the forefront of their campaigns and more importantly, the candidate who is ultimately elected enacts meaningful change.